All of the members of the Board of Trustees are Texas public servants, keenly aware of the issues that local governments face regarding their insurance needs. Our mission will always be to provide the best combination of pricing and service possible.

- Chairman of the Board, Scott Payne 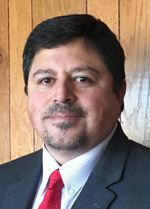 Commissioner Paul Hinojos graduated from the University of Texas of the Permian Basin in 1989, and has been with West Texas National Bank since 1991.  He was elected County Commissioner for Precinct 3 of Reeves County in 2012, and was reelected in 2016. Paul was appointed to the Board of Trustees in 2016. He is active in a variety of civic organizations. Paul and his wife have a son and daughter.